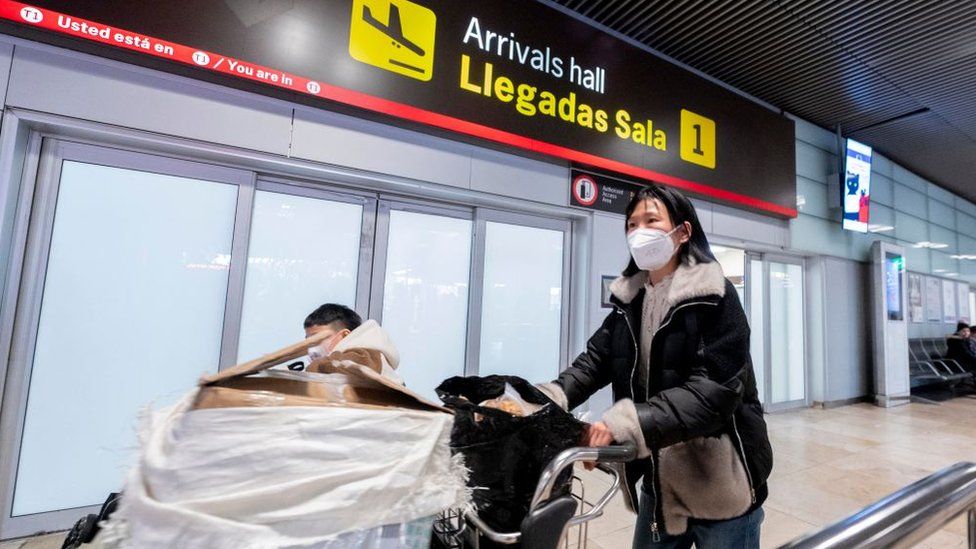 The Chinese government has suggested that travel restrictions imposed by several countries on Chinese arrivals are politically motivated - and has warned that it may retaliate.

The US, India and the UK are among the nations that have introduced mandatory testing for arrivals from China.

The country has recently seen a surge in Covid cases following the easing of its strict controls.

And there are fears that cases and deaths are being vastly underreported.

China's last daily Covid update, on 24 December, reported fewer than 5,000 cases - but some analysts claim the daily caseload is already over two million, and could peak at almost four million this month.

A lack of data - and China's announcement that it was easing curbs on travel from 8 January - led to more than a dozen countries announcing Covid testing on arrivals from China.

The World Health Organization (WHO) has urged China to share more real-time information and a spokeswoman for the foreign ministry on Tuesday said that Beijing was willing to "improve communication with the world".

However, spokeswoman Mao Ning said the government was "firmly opposed to attempts to manipulate the epidemic prevention and control measures for political purposes, and will take corresponding measures...according to the principle of reciprocity."

China's borders have been largely closed since March 2020 - meaning few foreigners were able to enter and those that did had to undergo rigorous testing and quarantine.

The European Union's disease prevention agency and Australia's Chief Medical Officer have both argued that high levels of vaccination and immunity reduce the threat that Covid poses.

But despite that, countries - including some in the EU - have imposed testing for Chinese arrivals.

"We're doing it while respecting the rules of the World Health Organization and we will continue to do it."

The European Commission, the executive body of the European Union, has said an overwhelming number of member states favour introducing travel restrictions. France, Italy and Spain have already introduced their own measures but a decision on whether that will be extended to all EU countries is expected on Wednesday.

The US has also defended its testing requirements, saying that its approach is based "solely and exclusively on science".

It's not the first time that Beijing has been at odds with the international community over the virus. It was first detected in Wuhan in central China in late 2019 and the government resisted attempts to investigate the origins.

Meanwhile, China has on Tuesday rejected an offer from the European Union to supply an unspecified number of Covid-19 vaccines to help deal with the surge in cases, saying it has an "adequate supply".

Official data shows China has given more than 3.4 billion doses - the vast majority of which are CoronaVac.

The government has so far insisted in using only Chinese-made vaccines, which have been proven to be less effective than other Western-developed mRNA vaccines against the Omicron variant.

Source: https://www.bbc.co.uk/news/world-asia-china-64155721
We use cookies to ensure that we give you the best experience on our website. If you continue to use this site we will assume that you are happy with it. Ok