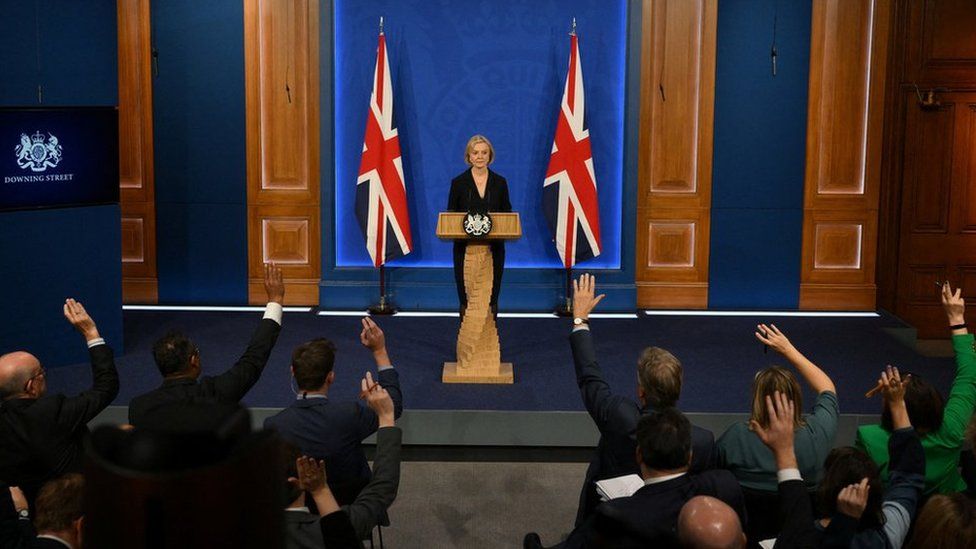 The UK's economic and political turmoil over the past few weeks - culminating in nearly all of Liz Truss's original finance plans now being axed - has been watched around the world.

It is rare for close allies to comment on each other's key policies at home - and if they do, it's unlikely to be an outright criticism.

But at the weekend US President Joe Biden weighed in, saying Ms Truss's original plan was a "mistake" and it was "predictable" that she would have to backtrack.

"I wasn't the only one that thought it was a mistake," Mr Biden said. "I disagree with the policy, but that's up to Great Britain."

The EU's economy chief, meanwhile, said there were "lessons to learn" from what is happening in the UK.

"What happened shows how volatile is the situation and so how prudent we should be also with our fiscal and monetary mix," said Paolo Gentiloni on Friday after Ms Truss fired ex-Chancellor Kwasi Kwarteng.

The world's media has been far more brutal.

"Liz Truss, who's been the British PM for barely six weeks, has managed to drag her party and her country into a debacle the depth of which the country has never before sunk to. And less so at such speed," says an editorial in Colombian daily El Colombiano.

Its headline suggests what the PM might be known for: "Liz Truss the Brief?"

"Clinging to her ideology, far removed from the reality facing the country, Truss exemplifies to perfection what it means to go against common sense when steering the politics of a country."

Meanwhile, the UK is becoming a "cautionary tale" about the effect of "bad politics", said an editorial in Indian daily newspaper The Hindu on Monday.

The newspaper - a widely-read English-language paper and generally critical of right-leaning political parties - said Ms Truss was "once seen as a new hope for breathing life back" into the UK Conservative Party.

But now she may have added the "label of 'incompetence' to the Tory governance image", it adds.

Russia's media speculates over Ms Truss's future, reporting that she might be out of her post soon.

"Yet another political crisis is looming over Britain: the newly minted prime minister, Liz Truss, may be forced out of her Downing Street residence already in the coming days and weeks," it says.

"The Tory leader's unpopularity in party circles and in British society has long been known, but now the [prime] minister has come close to the end of her scandalous career."

China's state media also heaped on further criticism. "The outside world does not seem optimistic about the turnaround of the Truss government," said state-run news agency China News Service on Friday.

But some online media, including Shenniao Zhixun, a blog run in south-west China, noted that the new Chancellor Jeremy Hunt, nicknamed "son-in-law of China", had a Chinese wife and "a good attitude towards China".

For the Irish Independent, Truss bought herself some time by the change of chancellor.

But "once we start writing about a prime minister 'buying some time', or 'seeing off the immediate danger', they are nearing the end of their time," the opinion piece on Sunday adds.

Source: https://www.bbc.co.uk/news/world-63285480
We use cookies to ensure that we give you the best experience on our website. If you continue to use this site we will assume that you are happy with it. Ok