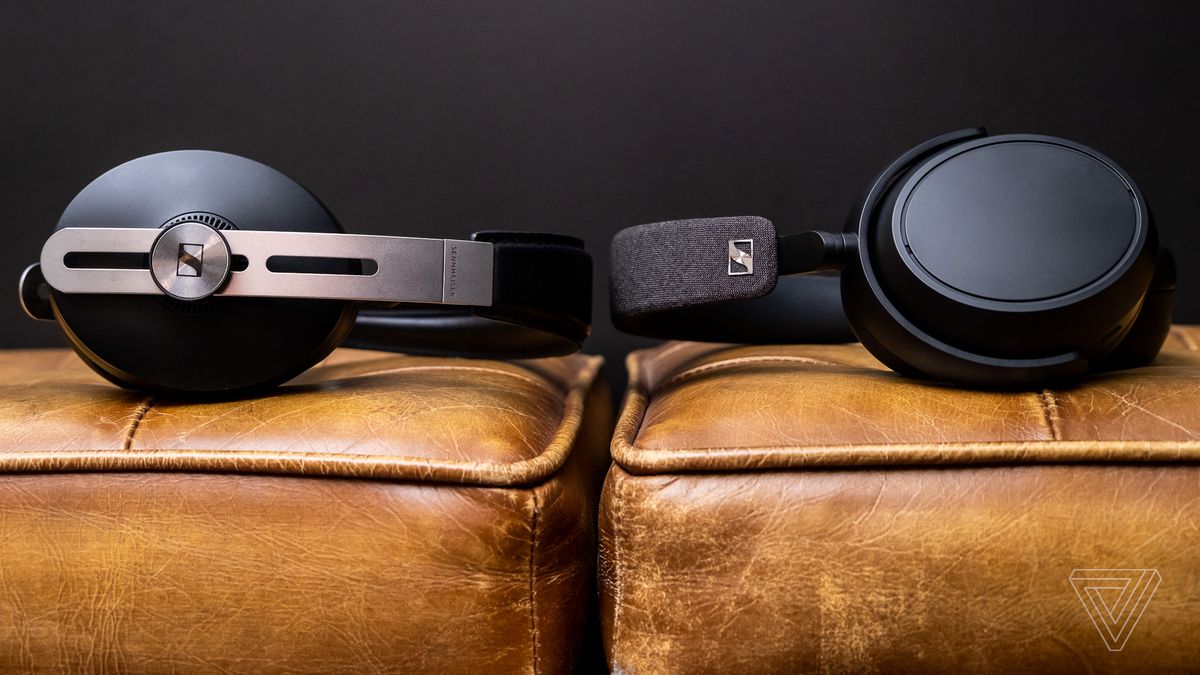 At left are the Sennheiser Momentum 3, with the new Momentum 4 headphones on the right.

It’s fair to say this isn’t what I expected. Sennheiser’s new Momentum 4 Wireless headphones mark a dramatic pivot away from the retro stylings of previous models. The genuine leather headband and stainless steel ear cup sliders that came to represent the Momentum line are now history. Instead, the $349.95 fourth-generation headphones take an unmistakable design turn into Sony and Bose territory, with a lightweight build that puts greater emphasis on extended comfort.

Additionally, nearly all of the physical buttons have been removed in favor of tap and swipe gesture controls. And while some of the company’s fans will be repulsed by what I can only describe as a dull, uninspired look, there are at least some reasons to be excited about Sennheiser’s latest cans. Topping that list are improved noise cancellation and a remarkable 60 hours of promised battery life.

How we rate and review devices

You won’t hear me argue that the preceding Momentum 3s are perfect headphones. The metal hinge’s folding point can sometimes snag hair or pinch a finger if you’re not careful. The headphones automatically power on whenever they’re unfolded, a shortcut that seems clever in concept but proves frustrating when they unexpectedly pair to your phone or laptop after being jostled on a desk or in the overly soft carrying case. But the Momentum 3s sound great, have easy-to-use controls, and exude character and panache. 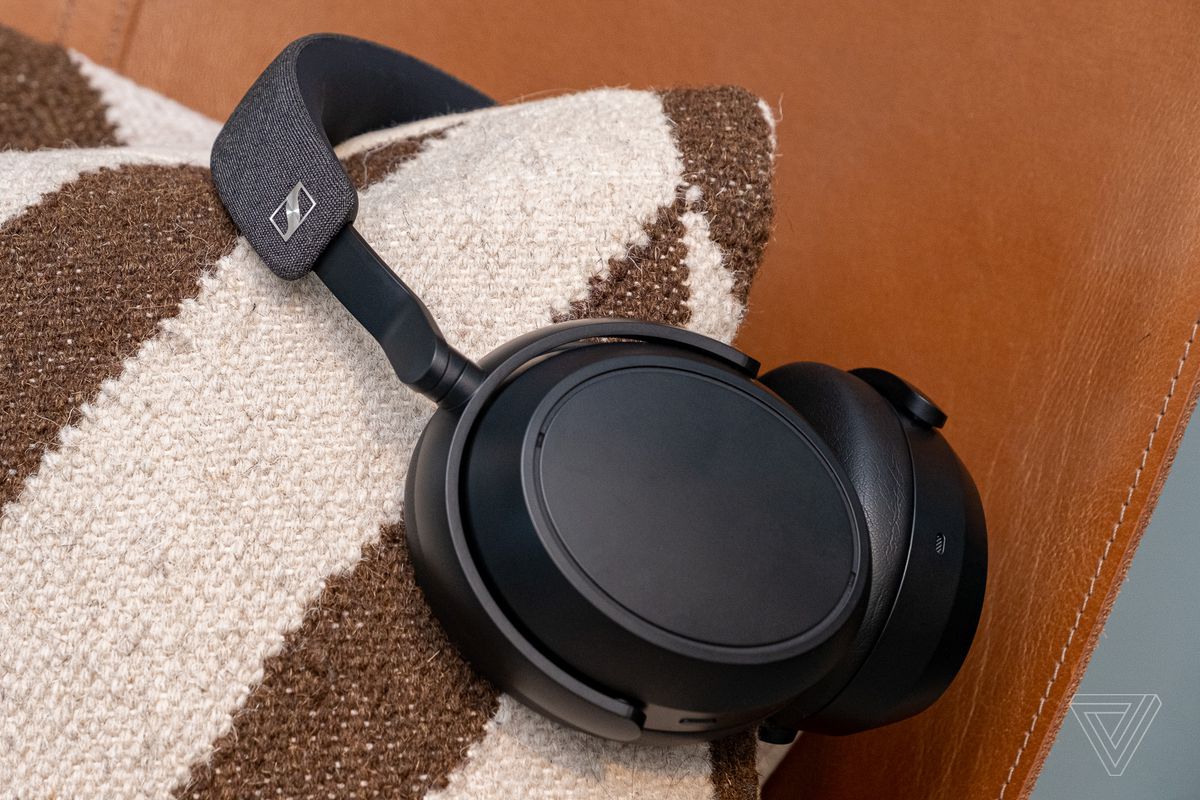 They’re plasticky and nowhere near as classy-looking but way more pleasant to wear.

The Momentum 4s still make good on the sound aspect (as I’d expect of Sennheiser), and they’re objectively more pleasant to wear. But aside from some fabric material on top of the headband, these headphones have been drained of any character. The Momentum 3s look right at home next to vintage stereo equipment, whereas the Momentum 4s feel soulless by comparison. They come off as generic, which is a jarring change in direction for this product line. And it’s all intentional. “We understand from our feedback that most people prefer a headphone design that rather blends in rather than stands out,” Sennheiser product manager Christian Ern told me.

There’s plastic everywhere — Sennheiser says there’s still metal reinforcing the headband — and they look like a mash-up of the company’s cheaper cans and something like the Microsoft Surface Headphones 2. With outer ear cups that promptly collect smudges and finger oils, these don’t look the part of premium, flagship noise-canceling headphones in the same way their direct predecessors did.

But they at least feel great on your noggin’. Sennheiser has matched Sony’s WH-1000XM5 in this department, which is no small feat. The Momentum 4s use artificial PU leather for the replaceable ear pads and headband padding, and both have ample cushioning. There’s not much clamping force to speak of, so they should remain comfortable on long flights or when you’re using them all day long at the office. 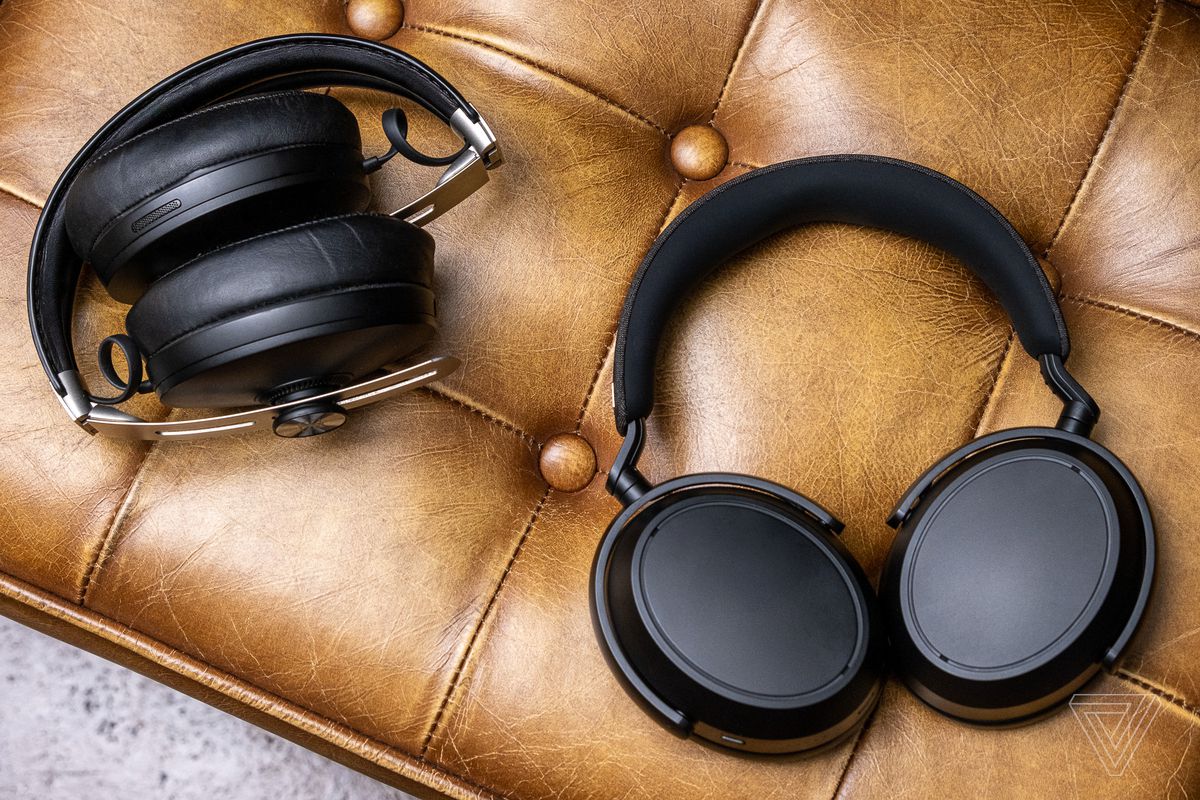 The Momentum 4s don’t fold up, but they can lie flat in the case (or around your neck).

And they still sound wonderful. Sennheiser hasn’t tinkered much with the audio signature, so if you liked the Momentum 3s, you’ll be just as satisfied with these. They’re a smidge less bassy out of the box — something you can override with EQ — and the drivers are now tilted toward your ears to make for an improved sound stage. (Apple’s AirPods Max perform a similar trick.) The Momentum 4s remain warm, smooth, and detailed across any genre you explore with them. Better still, the Momentum 4s leak less noise to nearby co-workers or coffee shop patrons than their predecessors.

The prior model consistently won out to my ears even over pricier competition like Apple’s AirPods Max, and the Momentum 4s are right on the same level. I have a much harder time picking between these and the Bowers Wilkins PX7 S2 as the best-sounding noise-canceling headphones on the market in 2022. The Momentum 4s support a range of Bluetooth codecs including SBC, AAC, aptX, and aptX Adaptive. If you prefer to go wired, there’s a 2.5mm-to-3.5mm cable in the case, or you can simply use a USB-C cable.

Speaking of noise cancellation, Sennheiser has also made inroads there. It’s still not on par with Sony or Bose, but the active noise cancellation in the Momentum 4s is noticeably more effective than what the Momentum 3s were capable of, which was barely passable. The transparency mode is perfectly adequate and provides a good sense of what’s happening around you — though it doesn’t match the “it’s like you’re not wearing headphones at all” sensation of the AirPods Max.

Unfortunately, I haven’t been thrilled with controls on the Momentum 4, and to me, they’re the biggest downside apart from the humdrum design. Sennheiser has excised the volume and multifunction buttons that were present on the 3s — and the same goes for the slider that switched between ANC and ambient sound modes. The only physical button on these headphones is for both power and Bluetooth pairing, depending on how long you press it. Track controls, volume adjustment, and ANC are all handled with taps and swipes on the ear cups. Some of these are easy to get down since they’re somewhat logical: tap the right ear cup once to play / pause, swipe forward or back to change songs, or drag your finger up or down the surface for volume control. You can tap twice to quickly move between noise canceling and transparency.

Sennheiser wasn’t content to stop there and decided it needed to add a pinch gesture that can be used for more granular control over the balance between noise cancellation and ambient sound.

A pinch gesture? On headphones? I think we might be pushing this a little too far. 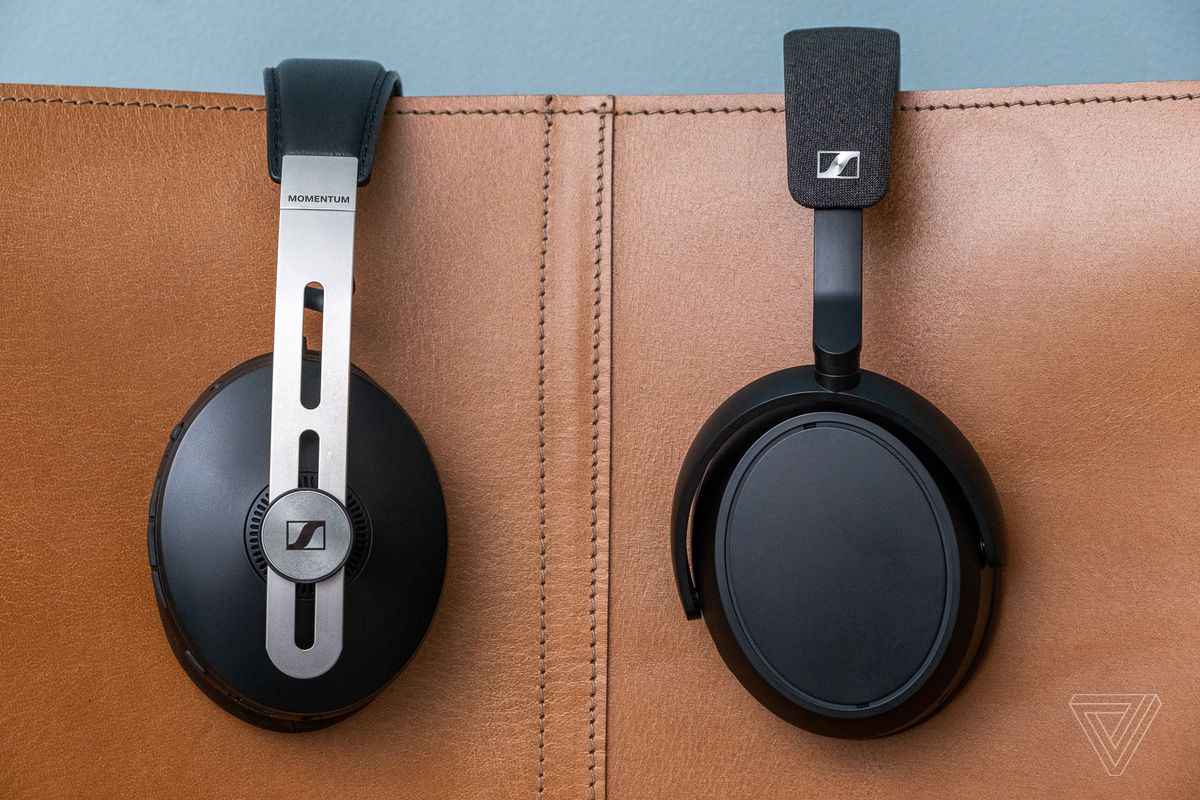 It’s not often you see this big of a design change from one headphone generation to the next.

Now, I haven’t had any real trouble with these controls in the thick of summer aside from having to remember them. But winter is always the real test for potential issues. “We have excessively tested the touchpad functions under many climate conditions,” Ern said. “Of course, there may be some extreme cases where the sensitivity of the touchpad is affected.” The company says that if your cold weather gloves are phone-friendly, they should work fine with the Momentum 4s.

Despite the gestures not proving bothersome yet, I still miss the traditional buttons. They were foolproof and required less thinking. 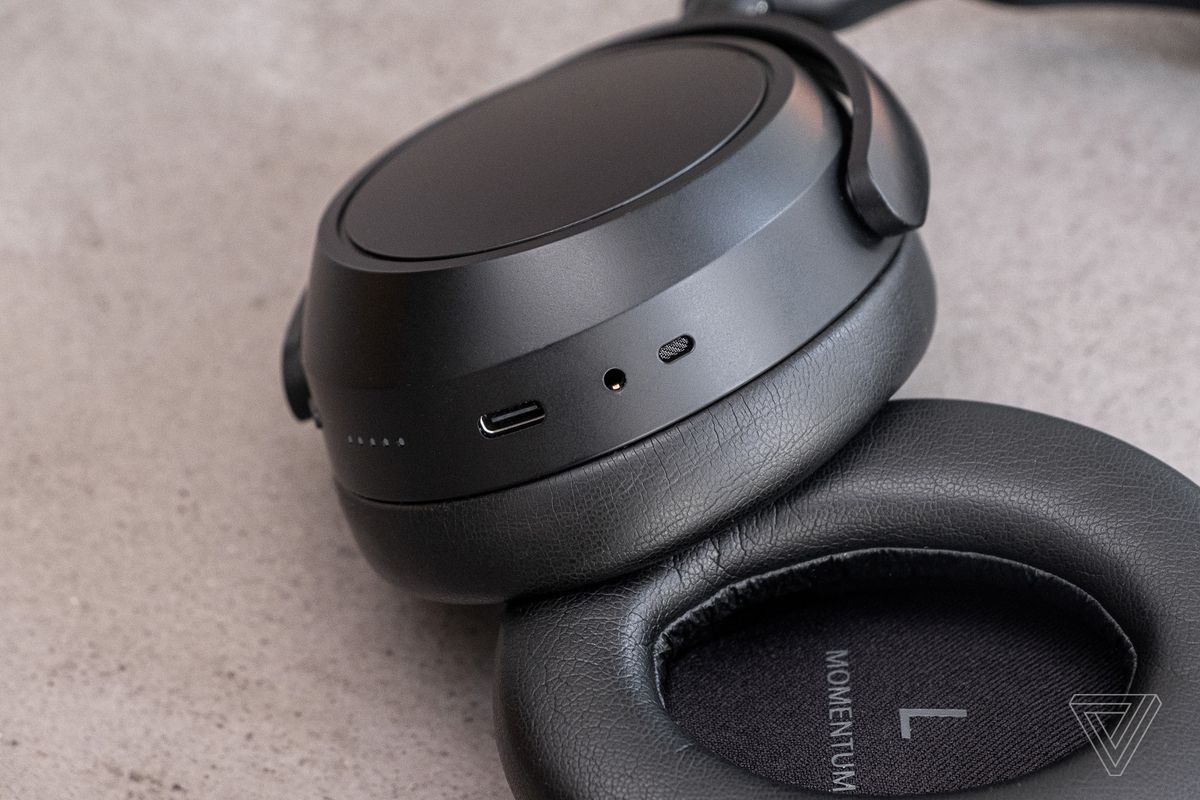 Fewer buttons but now you get a battery meter. And at least there’s still a (2.5mm) headphone connector.

I’ve also noticed that these headphones have a propensity for turning on while inside the case. The case itself is much improved this time around: it’s a proper hardshell design — shaped like a Goomba from Super Mario Bros. — that offers better protection than the very soft, collapsible case that accompanied the Momentum 3s. So that’s not the problem. Maybe the power button is rubbing up against the case’s ear cup divider or perhaps they’re just waking from sleep whenever I move the case. But either way, my phone is constantly connecting to them at times when it wasn’t my intent. And that gets annoying. 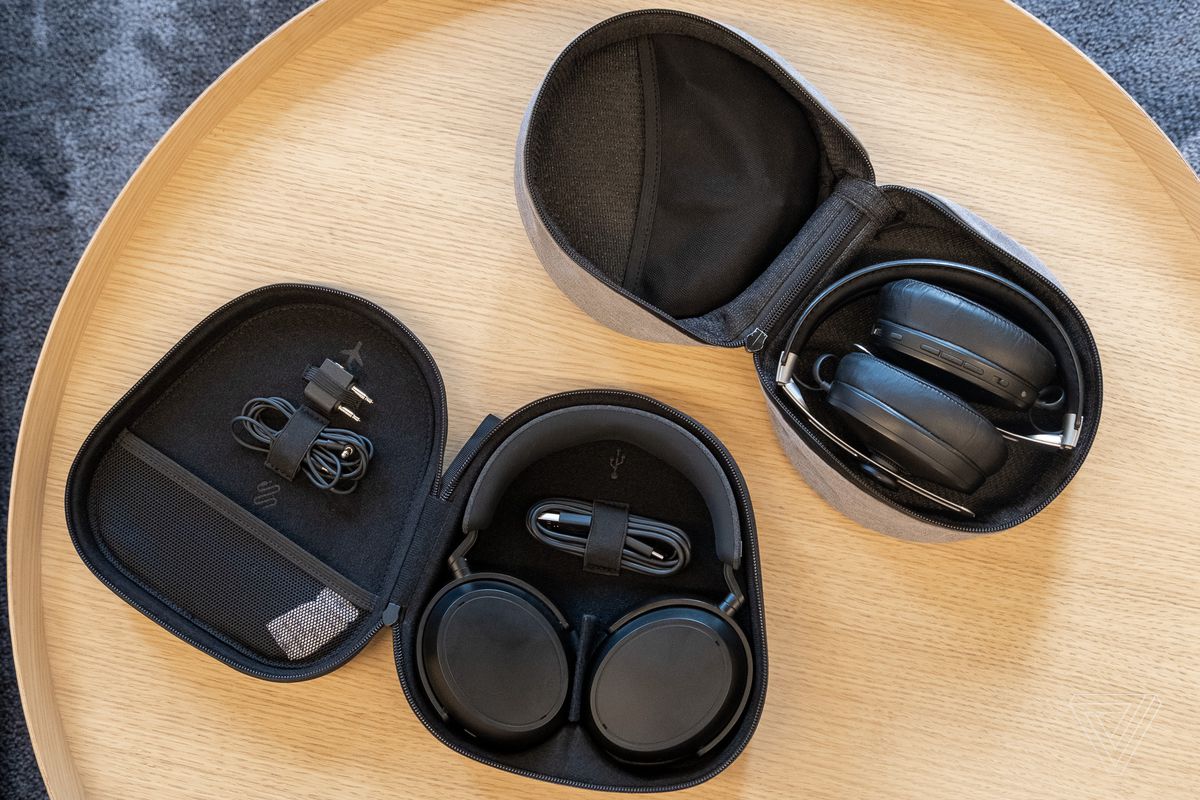 Yes, I did forget to remove the silica gel packet from the new and improved case.

Sennheiser claims the Momentum 4s can last for up to 60 hours on a single charge. That’s a ludicrous number and handily surpasses Sony, Bose, Apple, and practically all other competitors. Some of that endurance is achieved with power-saving features; the headphones will enter sleep mode after going unused for 15 minutes, and they include on-head detection to conserve juice as well.

With battery life that long, I haven’t been able to clock a total running time or exhaust the battery more than once or twice in my time testing them. Even if they don’t end up hitting that 60-hour mark in all cases or at louder volume levels, I can confirm that they’ve got more stamina than anyone could possibly need for travel or common use cases. I can’t imagine anyone would require this kind of marathon battery life, but it means you can go longer than ever before without worrying about plugging in the Momentum 4s.

Voice call performance is superior to the Momentum 3s but still nothing to write home about. The newer headphones fare better at voice pickup and separation, and everything sounds fine if you’re on a call at home. But in noisy environments, it’s still evident that you’re talking to people through headphones. Sennheiser continues to support multipoint Bluetooth, and the Momentum 4s juggle two simultaneous connections with ease and reliably play audio from the device you’re actively using.

Rounding things out, Sennheiser’s Smart Control app for Android and iOS lets you personalize EQ, adjust settings like wind reduction and sidetone (which lets you hear your own voice more naturally on calls), or set up “sound zones” where sound settings automatically adjust based on your frequent locations. Sony has long offered a similar feature with its headphones, and Sennheiser’s works similarly well — though it requires setting up an account, which I’m never a fan of in headphone apps. 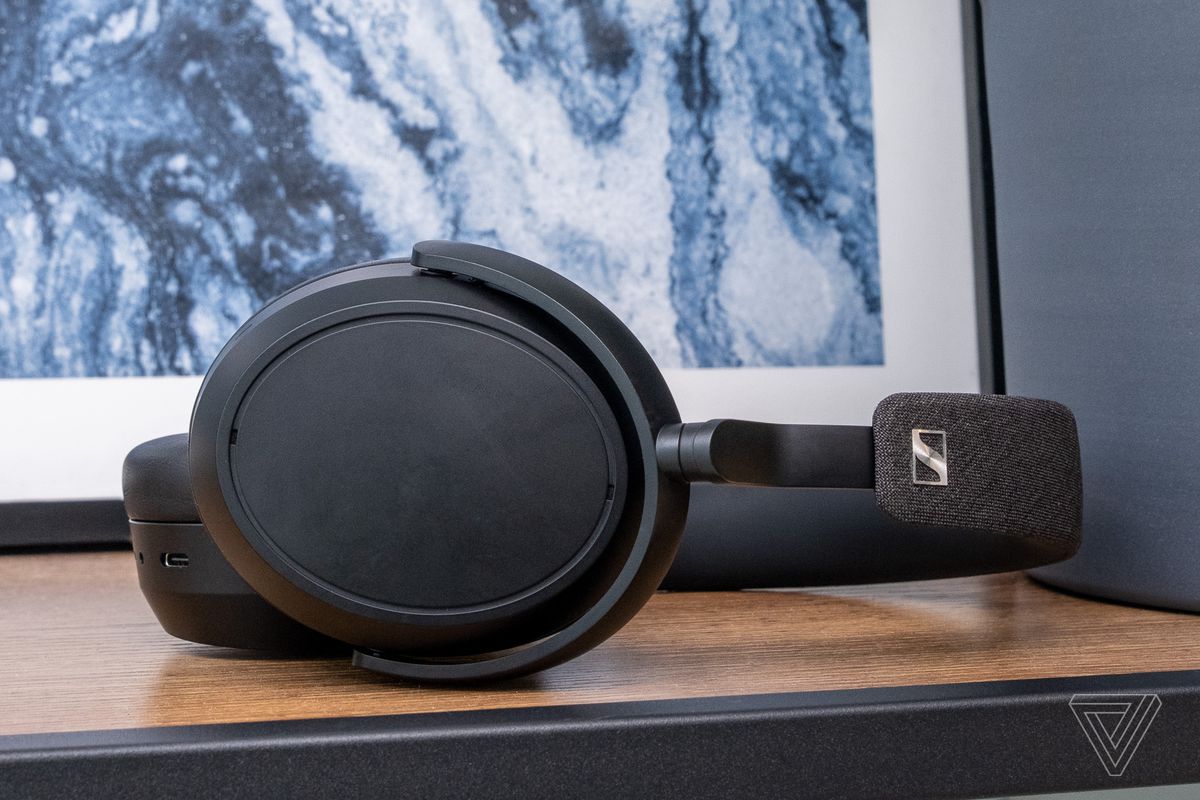 Sennheiser’s small logo is the only outward-facing branding on these headphones. “Momentum 4” is printed inside the ear cups.

The Sennheiser Momentum 4s aren’t bad headphones by any stretch. They still deliver top-rate sound and now do so in a design that’s appreciably more comfortable than past models. It’s unfortunate that the company went in such a drab direction with the style.

Between the new aesthetic and revamped buttonless controls, Sennheiser is obviously playing follow the leader with Sony. It no doubt bests the WH-1000XM5s in the audio department, and the 60-hour battery sets a new bar for the field. But the Momentum 4s still trail the noise-canceling powers of Sony and Bose, and I’m not convinced Sennheiser made the right decision in adopting touch gestures just like everyone else.

Aside from the improved comfort, there’s little incentive to upgrade if you’ve got a pair of Momentum 3s: the sound is similar, both headphones have convenience features like multipoint, and there are elements of the older headphones that I prefer — build quality for sure. But I suspect that even if the company’s longtime customers view this as a sudden, unforeseen shift, Sennheiser’s reshuffled priorities might end up making the fourth-generation Momentums the most successful pair yet.

Photography by Chris Welch / The Verge

Source: https://www.theverge.com/23297129/sennheiser-momentum-4-wireless-headphones-review
We use cookies to ensure that we give you the best experience on our website. If you continue to use this site we will assume that you are happy with it. Ok